Been working on the hobby for about fifteen years and I've been playing DZC and DFC since their inception. They are the only games I play now (okay... I also play Fallout Wasteland Warfare) and I'm very committed to them.

I'm technically collecting all armies/fleets, but I have a pretty strong focus on UCM/Scourge.

Hope you enjoy the posts here, and please do give feedback!
Top

First up... lets look at Destroyers! I used large rectangular magnets for the "prongs" and custom wings involved. These were roughly 5mm by 15mm or so. I can't speak highly enough, as they made installation much easier, (no drilling) and keep a steady, strong, and straight pointing fit. Though, the various wings are a tad bit "out" compared to a traditional drilled in magnets. 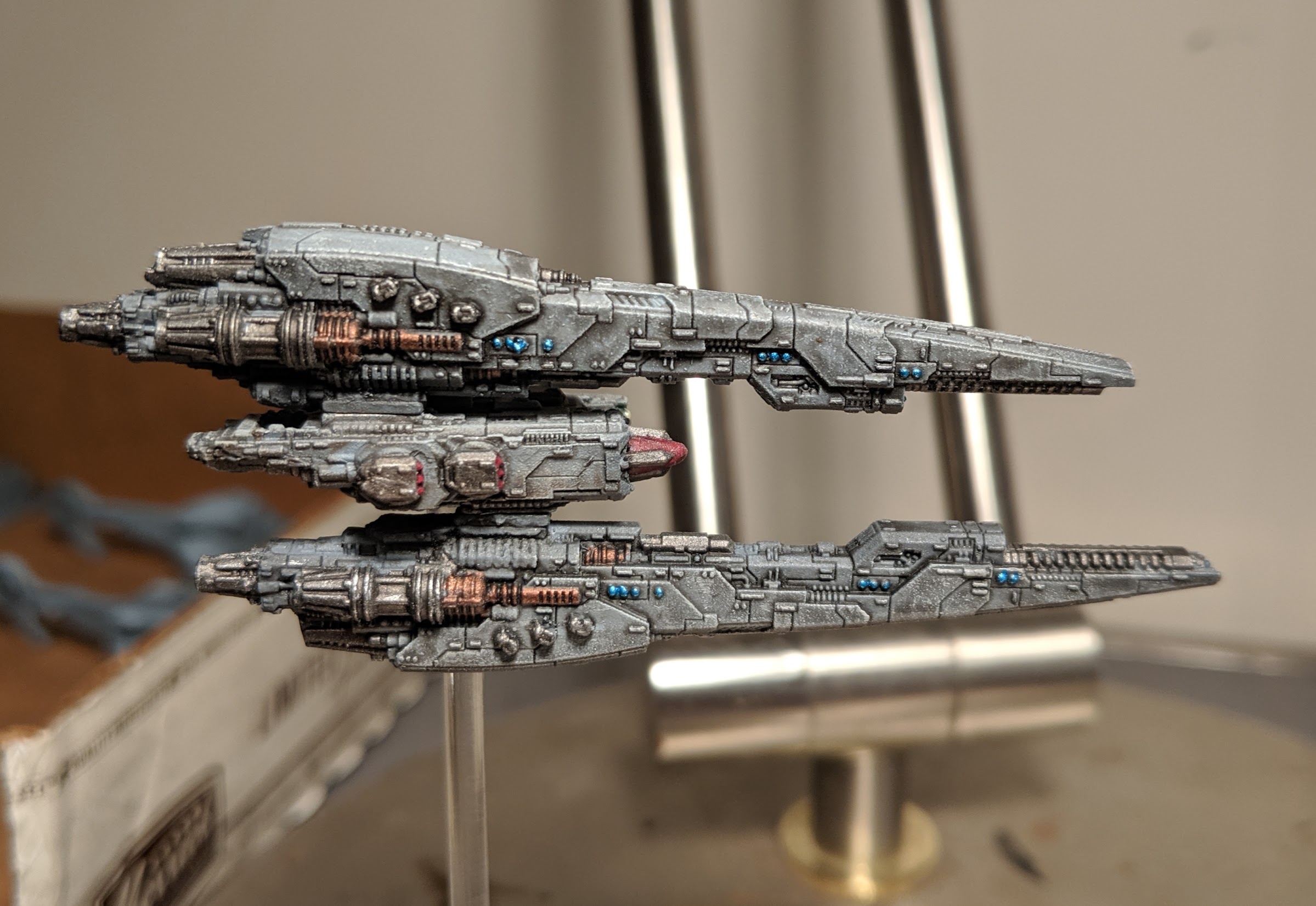 Havanas are really exciting for me, I love their clear mission... fire Torpedoes and then dive into close combat! 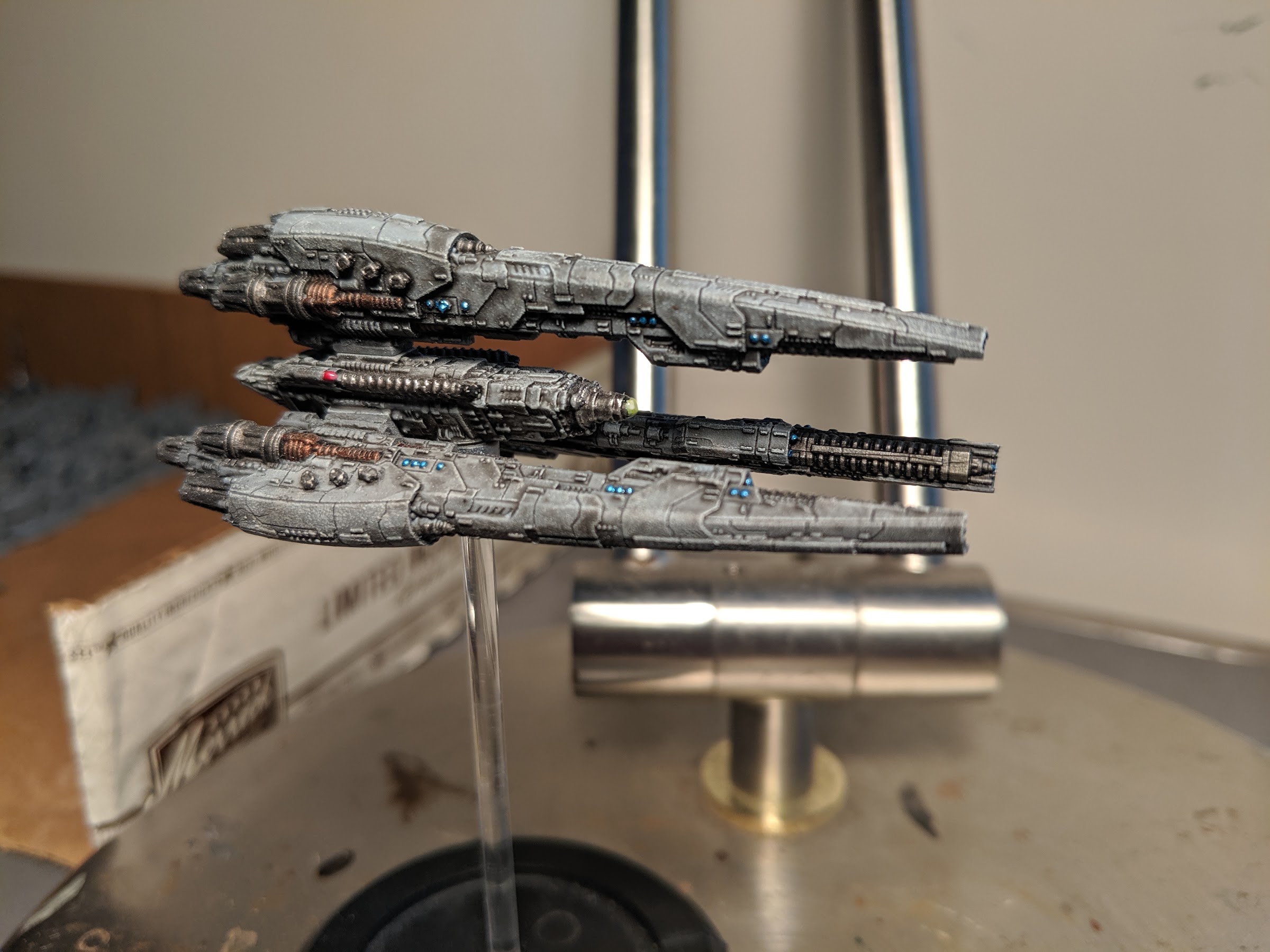 I actually will only need to use these Kiev hulls when I need 4 of them and no Havanas. Reason being I have a great scratch-built stand-in for the Kiev (I'll show them later), so I have two. The resin for these was a bit bendy when I got them, but I sprayed with matte varnish before priming and that hardened them up. 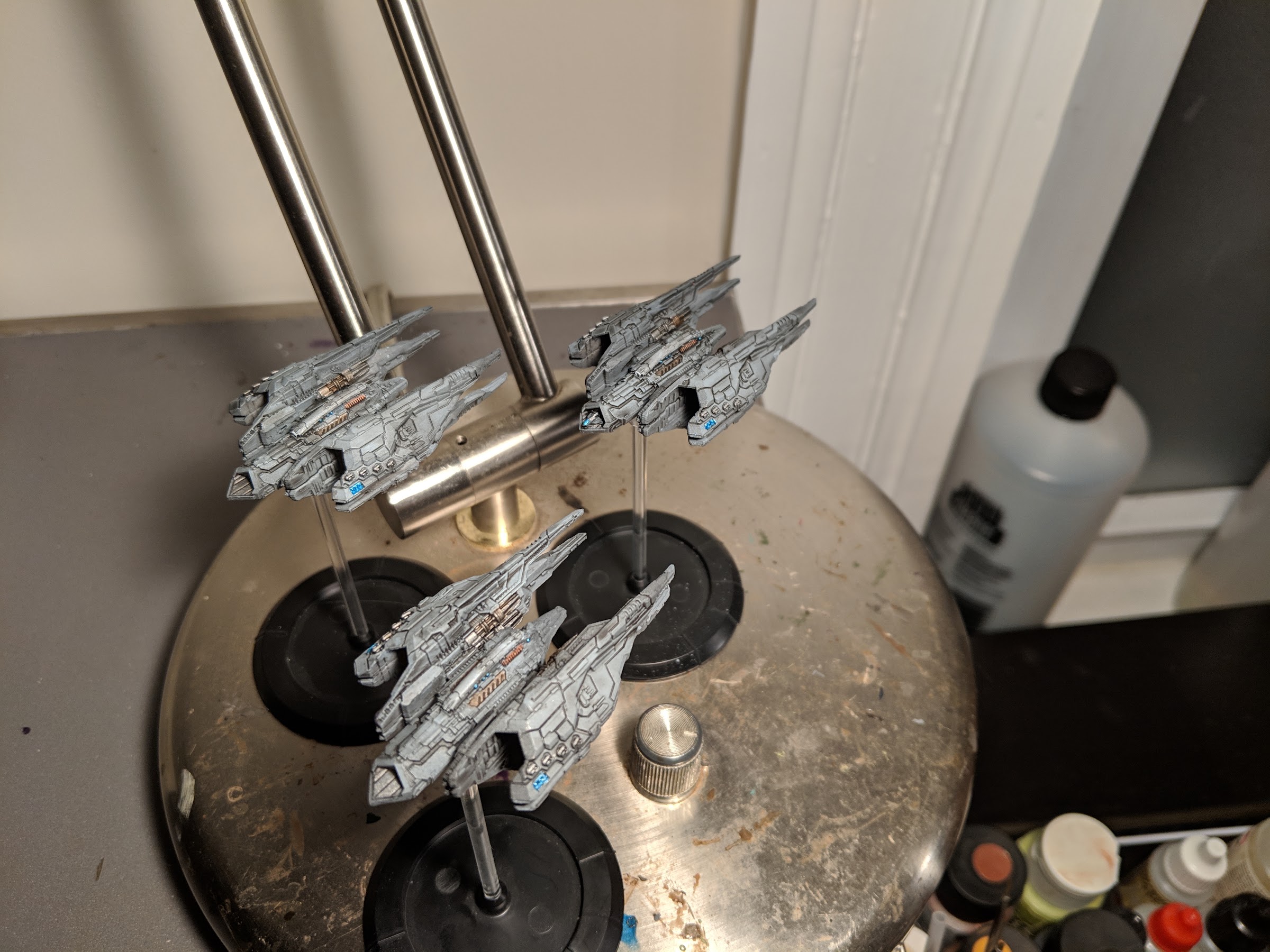 My custom Vancouvers are a simple mod. Just take two Seattle wings and glue them together, it makes for a really big open "maw" for fighters to pour out of! These are also magnetized so that I can use the proper prongs as needed!
Top

Your images don't work, yo.
Top

Great conversions! Could you share some info on how you use rectangular magnets? Round ones have always been my preference because they're easy to match with drill bits so that they can be flush mounted. If you've found a way around this, it could make magnetizing my Shaltari fleet much easier.
Passion has little to do with euphoria and everything to do with patience. It is not about feeling good. It is about endurance. Like patience, passion comes from the same Latin root: pati. It does not mean to flow with exuberance. It means to suffer.
Top

You can actually see the magnets in the photos... I measured the rectangle section of connections between hull and prong, and bought rectangles to fit. Shaved flat and glued on magnets! No drilling needed.

This does mean that the model itself doesn't keep the prongs straight, the magnet does the work... so make sure you get strong ones... that being said, I tried traditional magnets and drilling and found this superior.
Top

This is my latest Fleet model... and one of my last UCM ships to paint! After a few years, I'm finally catching up lol!

The paint scheme has evolved over time... but the "final" form lol is such: 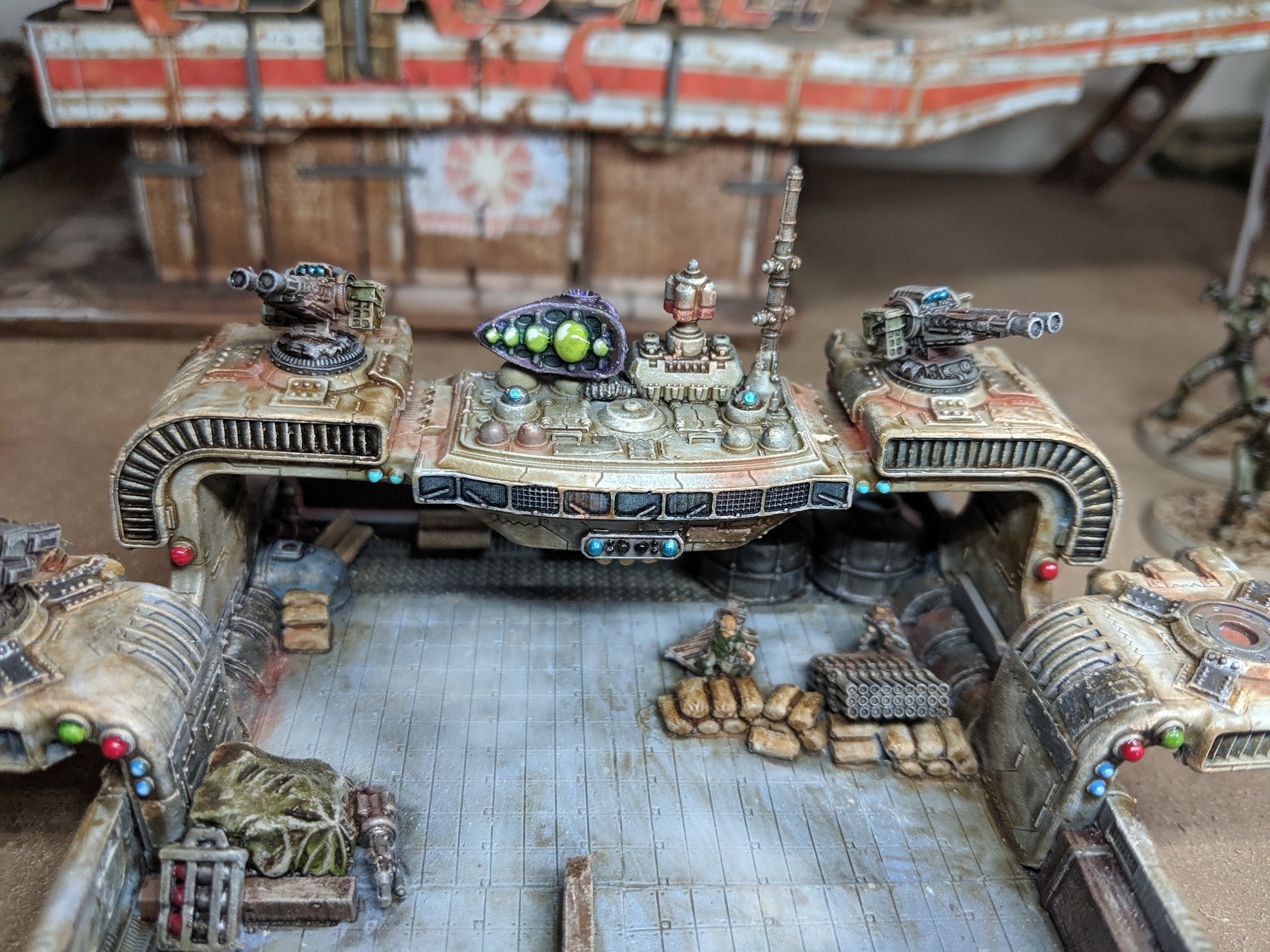 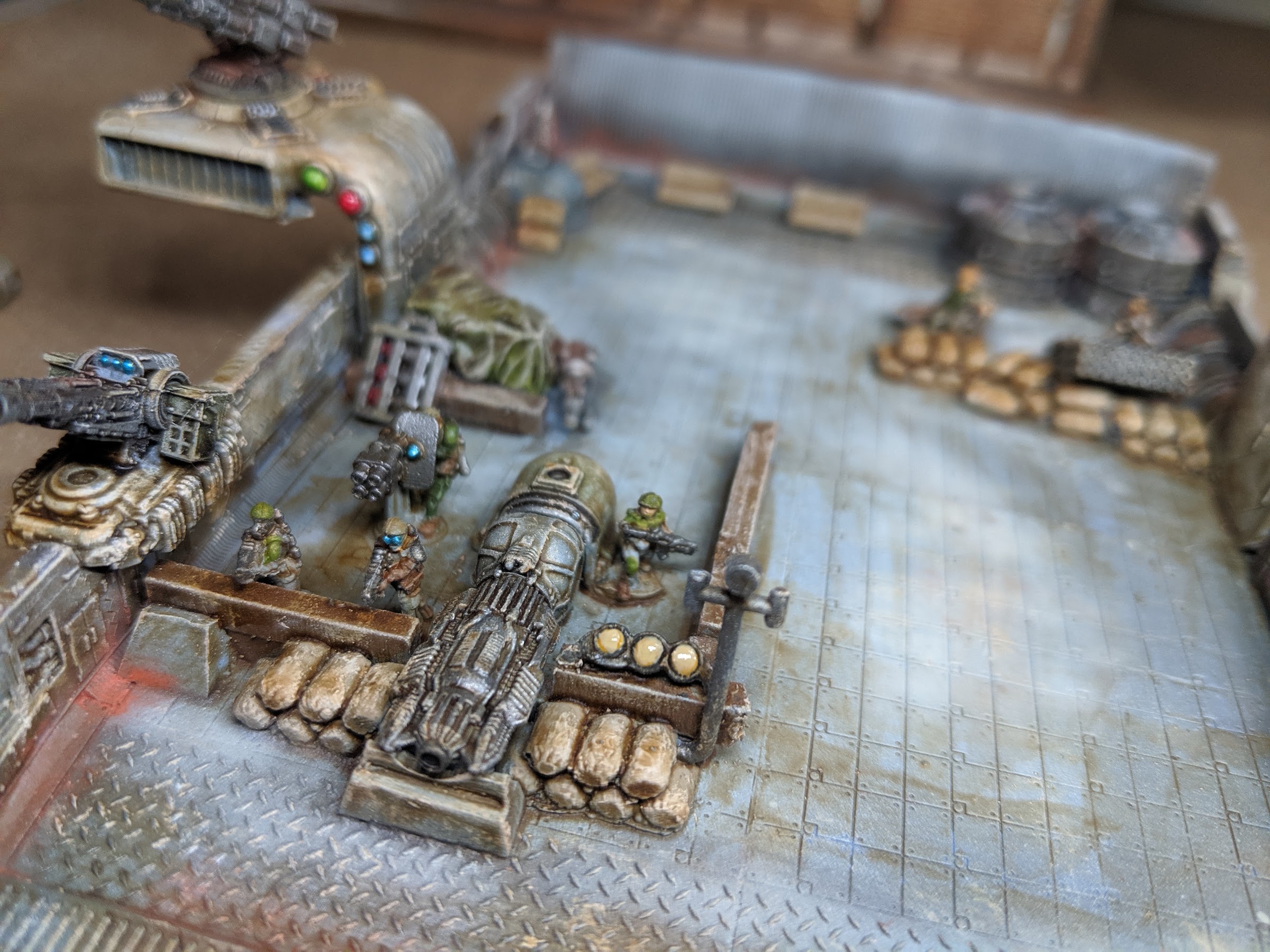 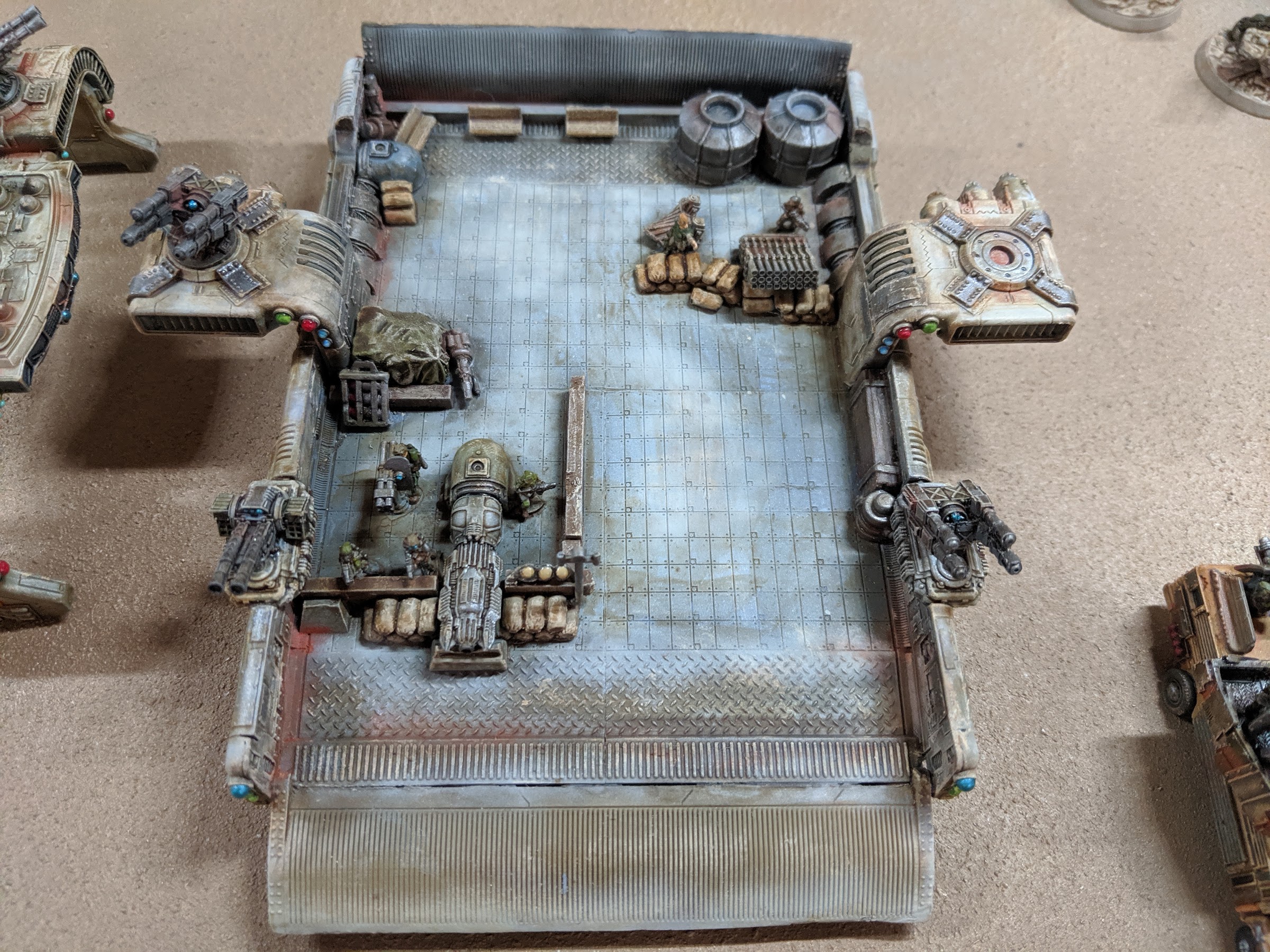 I'm very proud of my Leviathan here for my Mad Max Resistance... it serves as a mobile workshop/HQ with benches, materials, extra rockets, fuel tanks, and a Crossbow emplacement... all while still being able to hold 6 wagons. The four proper turrets are magnetized, whilst the lower two are extra AA. I used a lot of DFC Spacestation kit pieces to add extra doo-dads, I really recommend you grab a kit as a lot of the tiny bits make great basing materials for infantry bases too!
Top