We would like to re-ignite the unit design competition started by Samael in 2014!

This year there will be two competitions, one for dropzone and one for dropfleet.
Dropfleet will be ships, station & sectors. While Dropzone will be designing MDF/resin/3D Buildings.

Each person can enter each competition (drop fleet and drop zone)up to 3 times.

There will be two rounds of judging fro DZC. The first by the admins. If an entry has the following then it passes the first round of judging:
Name
Background
Sketch*/photo
MDF flat building on 3mm mdf & 1mm mdf.
Profile in game/mission
This first round is to ensure we have full entries, rather than just entries consisting of stats.
A further selection will be made if needed.

Then the entries will be compiled into a finalist document (upload by a admin). Once this is made the voting will commence and the winner will be announced at the end of January.

In addition there will be an overall winner.

So let see what everyone can come up with! So post your entiries below!

*as in drawings are good enough, with a scale & sketch of what your end result should look like. The more effort the more you are likely to win of course!
“We're like the Forums little pitbull. You'll beat it, mistreat it, and once in a while we'll escape to attack somebody.”

This sounds interesting but I'm not sure I understand:

This was posted December 8th but started November 25th? Maybe it first appeared on Facebook?

The list of requirements are due December 31st for the first round and then further requirements will be requested? or that is it and the Admins will vet the entries for a public vote?

What do you mean by MDF flat building (for DZC)? You mean we aren't kitbashing a building, we are designing something for people to laser cut on their own? If the latter, do I need to have an actual working copy cut and assembled for view? Lastly, does it have be something requiring a laser cutter or can the model be milled on a CNC?

Finally, is this the tread we enter our designs for DZC?

After the 31st admins will vet. Then a poll/special thread will be created.

As to what I meant with flat, as in drawings are good enough, with a scale & sketch of what your end result should look like. The more effort, the more you are likely to win of course!
CNC or Laser doesn't matter.

Hopefully that answers your questions.

Cheers, Michel
“We're like the Forums little pitbull. You'll beat it, mistreat it, and once in a while we'll escape to attack somebody.”

So a sketch is required? I'm not exactly what one would call artistically talented but I would like to submit items
Top

Mr.prowler wrote: ↑
Thu Dec 19, 2019 12:22 am
So a sketch is required? I'm not exactly what one would call artistically talented but I would like to submit items

You could for instance take photos of the different stages. The main idea is to help others by making and inspiring.
“We're like the Forums little pitbull. You'll beat it, mistreat it, and once in a while we'll escape to attack somebody.”

After the initial success of civilian made "hazard suit" Armor teams, It was decided that weaponized powered armor might very well play an important part in the colonial war machine. Several months cutthroat competition between private firms lead to a victory by the Ferrum based Xianzheng heavy industries. After producing nearly a thousand units, incredible cost overruns and staff retention issues bankrupted the company, swiftly ending the program. However, a handful of suits still remain active in the field, where their overweaponized frames can take and hold even the most heavily defended areas independently.


The Cataphractii is classified a "heavy power suit" by standard designation, but that term fails to convey its raw brutality. 9 feet tall and 400 pounds unarmed, it's angular frame is too large to even fit inside Bear or Raven A transports. Units are loaded onto Raven B's, where they can quickly transition into their drop and shock role. On multiple occasions, after fully expending their ammunition, MF/R units using Cataphractii armor have been able to best eviscerators in single combat, a feat recognized to be nearly impossible by standard means. The Armor is unusual in that it is (currently) the only flight capable armor in the colonial arsenal; a suite of 12 thrusters positioned around the body provides enough lift for it to catapult itself in a direction and break the landing. Upon doing so, Cataphractii will quickly expend their prodigous ammunition stores to obliterate as many enemy assets as possible.

*Notes*
I did try drawing this. Multiple times. After 4 sheets of paper I decided I'll just take the L for drawing.
Stats are below.

Jump-Jet Pack: This unit may move over scenery pieces up to 8” inches high. In addition, this unit may choose to retain its full MV distance when exiting a Garrison, although cannot embark into a Transport if it does so.
Concussion: If a Garrison is hit by this weapon, all Infantry inside are moved away from the edges, and no Infantry can move to the edges during this round.
Transport type: 1 light dropship point each base for a Raven B (not A, they would be too big)
Top

Thank you for kicking off Mr. Prowler!
Sketches were meant for buildings/terrain, not the design of unit's

So no worries.
“We're like the Forums little pitbull. You'll beat it, mistreat it, and once in a while we'll escape to attack somebody.”

Orbitaldrop: this unit my select to drop with insertion pods from the Orbit directly behind the enemy lines. You can place them anywhere on passable Terrain on the board. Roll a d6 and a direction dice to detirmen deviation.

Story: the odit's are specialy trained units who get droped from low orbit onto a battlefield with one man escapepod like single use pods. ODIT units are task with clearing landing zones for the mainforces or Sabotage enemy supplyrouts and defences. Like old world paratroopers this man are trained to survive for month on their own and fullfill there tasks under any circumstances.

Story: the cannontruck was made by many resistance tribes with the hull cannon of a Hannibal mbt after they got disablet or destroyed. Because of the high regards the resistance have about the tanks who kept them save for 200 years from the nightmarish scourge, the resistance Honor their fallen warelephant by scavaging the usefull parts and cooperat them into other tanks or lucky charms and put the cannons in the back of trucks to enable them to continiue the fight against the enemys.

Story: what will you do when you got a Brunch of mbt hulls in storage but no turrets to fit them on? You are despretly in need of supply and the only thing your scavangers can find a bunch of m3 Alexander turrets? Right! Slap the turrets on top on the hulls, remove some weight from the turret like this useless grenadelauncher and bam! You got a fully funktional Vlad tank. The first mbt designt and produced since almost 200 years in earth.
Top

The West River Apts. are located at the edge of New Melbourne, overlooking the alpine region and the hydro dam that once powered the settlement. The inconspicuous appearance of the structure combined with the proximity to access points of the concealed Resistance cave network has made it a regular location for Resistance and UCM recon to rendezvous to trade intel in the lead up to the reconquest of the settlement.

Model details: The model is made of of several tiles designed in CAD and combined to make one building face. Its' my intention to make a series of tiles that can be mixed and matched to make a variety of buildings. 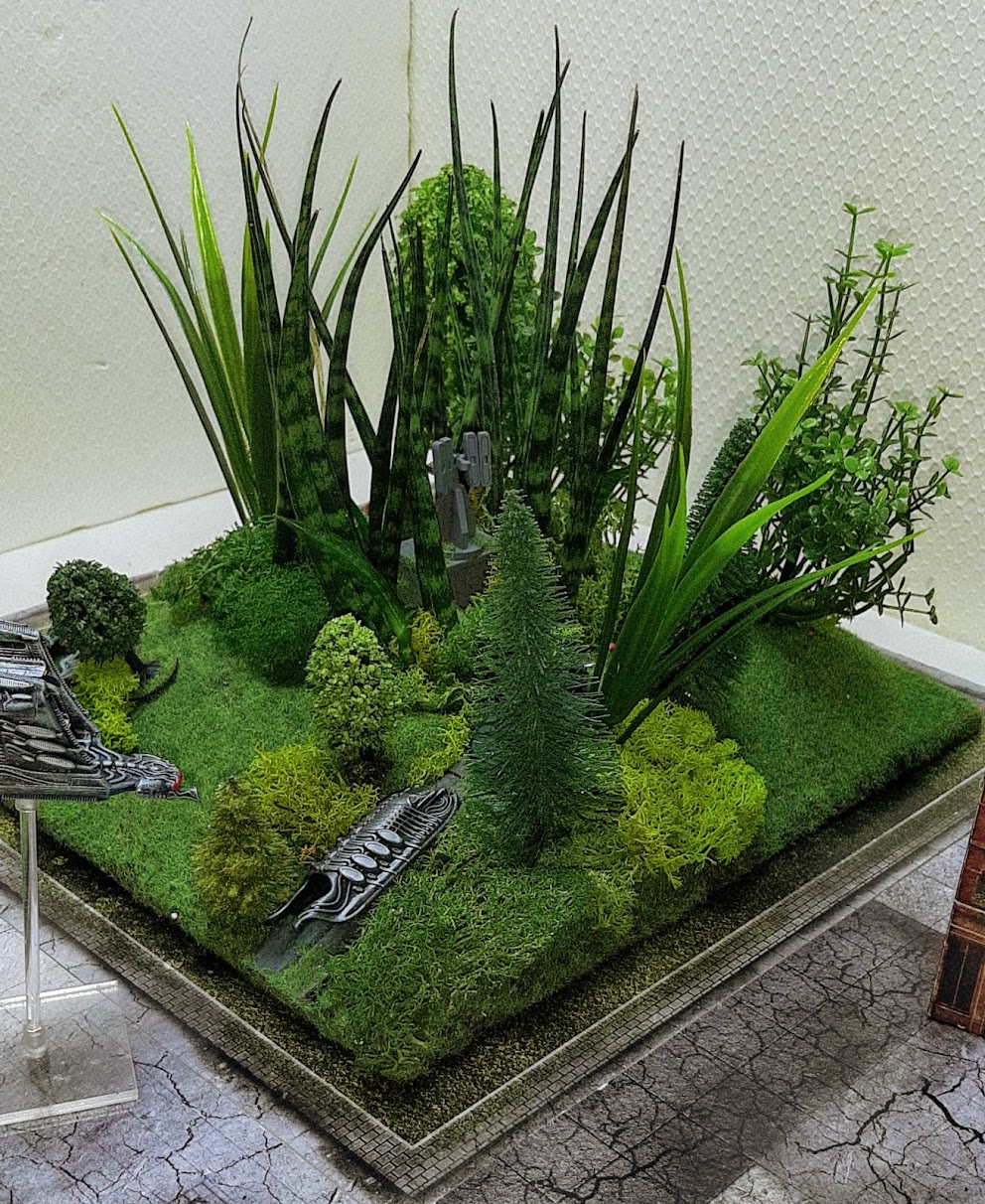 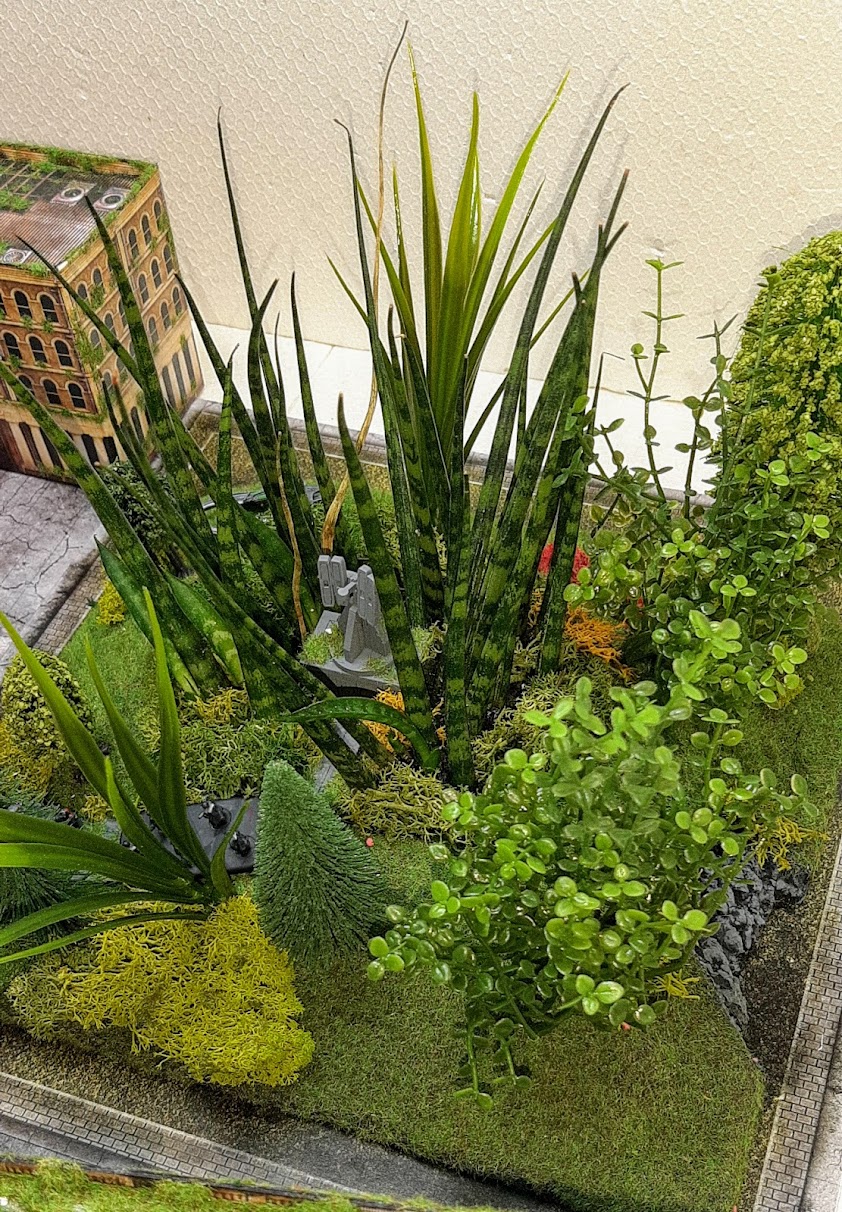 Background:
Resistance groups have installed a secret surveillance network in the area. Hidden cameras and communication relays are scattered over the city district to monitor all movements by the scourge occupation patrols. The control nexus is installed in an old service building hidden on a forest hill. With its overgrown vegetation the hill provides excellent cover for the resistance forces operating the system.

Creation log
I got some cheap plants from a large funiture/deco warehouse (the swedish type) and planned to create such a forest for a while already.

The base is made from 4 cm styrodur. I cut a hole for the flower pot and shaped the hill slopes

Then i covered the foam with wood glue/water and sand and painted it black with an airbrush. Afterwards i put model train grass on it and the glued the tiles for the footpath and fixed the small MDF building and antenna.

In the last step i painted the rock sections and and add the vegetation around.